Posts Tagged The Given Day

Recently, I suggested The Given Day by Dennis Lehane to a writer friend. He blogged about one of the characters here. I recently finished the book myself, but part way through it, I started realizing I really didn’t think much of most of the characters. The one B.K. talks about, Luther, is probably my favorite imagined character. I also like Babe Ruth, who is used as a frame for the novel, but this device was not universally thought to have worked. (review by Jonathan Yardley.)

First, let me say I did like this book. The writing was always good, sometimes wonderful. The history is incredibly interesting, especially since I didn’t know much–or really any–of it. It demonstrated that problems in our current age have had counterparts in the past. There were terrorists before Oklahoma City. There was labor unrest that wasn’t related to mines. Neither AIDS nor Ebola were the first diseases to wield fear in the populace. 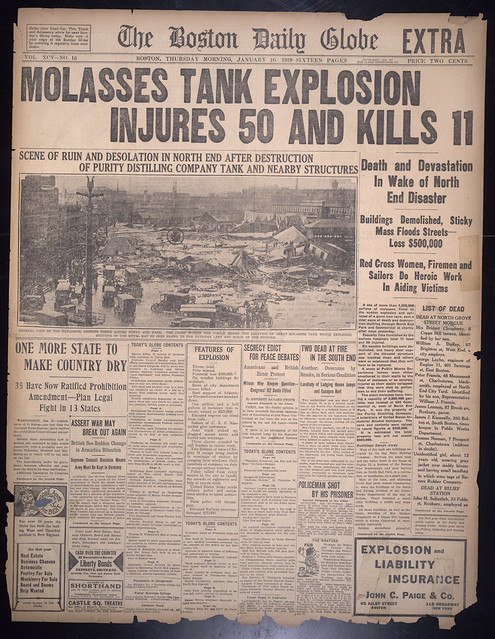 For the most, part the story is riveting. Even though Mr. Lehane, in a 2012 interview,  stated he didn’t think the novel would ever be filmed, it would make an interesting mini-series. One top of all that, the WWI time period is one of the most fascinating to me. I didn’t recognize my problem with the book until I was close to done. It is just over 700 pages and took me quite some time to finish. I’m not sure where I started to realize I didn’t like most of the characters. Luther Lawrence was interesting, possibly due to this flaws. As referred to in the blog post mentioned above, I did care about him and wanted him to be okay. The sad thing is, I didn’t care about the main character, Danny Coughlin.

Now, I don’t think characters, even the main character, has to be likeable in order for me to read a book or to like a book, but in this case it wasn’t really a question of likeable; it was more a question of believable. He seemed to be one of those characters who is in almost all ways perfect. Handsome, smart, an honest policeman, good in bed, a ladies man who loves the one lass he eventually wins. He stands up to his father, tries to maintain contact with his brothers. He befriends Luther, who is a black man on the run and a one-time servant of  the Coughlin family. Why, he even has the perfect name as his real name is Aiden. True, he has a few flaws. He is less than generous toward his one-time police partner who contracts the Spanish flu and ends up destitute.  He also has a bad temper and bashes in a man’s face. Possibly that act was what made me start to question, then realize even in his anger he was just too close to perfect. One character of this sort would not normally be a problem for me, but most of the other policemen seemed to be from Central Casting, especially those in Danny’s immediate family.

What probably nudged me to the edge of shutting the book was the less-than-stellar portrayal of the women. Most of them are, again, just about perfect, or if not that, barely there. Danny’s mother is mostly off scene, in bed. There is an Italian who likes sex, doesn’t care about her baby, and can’t speak much English. She isn’t who she appears to be and none of her stories add up, yet she never becomes more than words on the page. One not fully developed caricature might not be noticeable, but most of the secondary characters seem to be cut from the same cloth. The love interest, for me, was the most egregious as not just Danny, but one of his brothers, and possibly all other men she encounters, love Nora. Why? I know almost nothing about her, how she thinks, why she does what she does. Most mysterious is why Danny’s father rescued her and brought her home naked? She then becomes the family maid who also works a second job but fascinates the brothers. I didn’t buy her for a second.

In many ways I hope Dennis Lehane’s prediction that this book will never be filmed doesn’t come true. The story is all there and with good actors playing the various parts, the characters might come alive and stop being cardboard cutouts of perfect people.

Below is a documentary about the period of history illustrated in the book. It contains many photos, but it is long.

What’s on YOUR bedside table?

The New York Times Book Review routinely asks the question above in its author interviews. Often, the books mentioned make me feel illiterate or at least lacking in erudition. I cheated a little on my own list below since one of the books I’m about to mention was actually on my chest of drawers. I relocated it to my bedside.

Here is a picture of the books that were next to my bed on Saturday, April 5.

And here is each book with a short comment.

I’d totally forgotten I’d asked for a copy of fairy tales for Christmas–in 2010 maybe! My idea was to read one per night so I could incorporate them into my work. I might have looked at one entry.

I asked for FAR FROM THE TREE for Christmas 2012. I read half of it and found it very interesting, but I had hopes of finding others who would like to read and discuss it.

This book was probably my newest acquisition. I’d read SENSE OF AN ENDING and loved it, but I found this one difficult to get into. Too fragmented, and then when I was reading it at night, the fragments were fragmented.

I loaned this to my friend N. so she could read the section on The Mommy Brain while I read about rearing babies the French way (see previous post). Although THE FEMALE BRAIN is interesting, it is more like a textbook that BEBE and I elected to finish BEBE before soldiering on in this one. I’m close to done.

RISING FIRE was loaned to me by a writing friend. I read the beginning and it is next on my reading list. It is written by a Colorado State University professor whom I once met at a picnic. I think he’s a friend of friends, too. Narrative/creative nonfiction isn’t my go-to style of writing, but after enjoying writing my blogging, I’m rethinking this as a possible creative outlet.

I started this novel, which I bought at an estate sale. I’ve seen Mystic River, of course, and enjoyed it, but I’d never read the author. The price was right so I picked this copy up this summer. Somewhere along the line. I started reading it, and even though I’m not a baseball fan, I enjoyed what I read. I put it aside to read THE FEMALE BRAIN. I may go back to it and read it concurrently with the nonfiction above.

My last “book” on the nightstand is a dream diary. I’ve read up on dreams and kept track of dreams at various times in the course of my life. It’s waiting for me to remember a dream and write it down.

The last item on my nightstand is the cause of me being behind on my reading.

My goal every week is to finish the Sunday Times by Saturday so that I can start fresh the next morning.  Sometimes when we’re away for the weekend, I ask my neighbor to please, keep the paper, so I can get a head start on other reading, but she usually gives it back to me anyway. I’ve read the Sunday Times since I was a teenager.

Probably I should say I read parts of the Times. We subscribed for the Book Review. If I read the whole paper all the way through, I’d be like my college friend June who saves the paper to read later but never gets around to it.

I’d probably read more books if I restricted myself to reading a few articles on line or had the Denver Post delivered instead of the Times. My latest excuse? You never know where an idea for a blog post might come from. I have a draft for a post generated from a story in last week’s edition and while glancing through today’s Styles section a feature caught my eye. I may want to address that issue here as well.

What books are next to your bed or wherever you tend to read?

World War I, Writing Advice, and a Storybook Ending.

Luck. A lot of luck is timing and that seems to be true with the story behind this novel, Somewhere in France. I haven’t read it, nor had I heard of it, until I found a link on Twitter. Although I’m not a big historical fiction buff, I am fascinated by World War I and may look for this after I finish the five or six books I’m currently reading.

From the interview above, Jennifer Robson mentions she wrote this novel, queried agents,  and  was told no one was interested in WWI. She apparently stopped trying to find an agent. When Downton Abbey became a hit, a friend suggested she try querying again. This year is  also the centenary of the beginning of WWI. I had wondered at the proliferation of movies and books set in that time period but hadn’t made the connection with 1914. (The Well-Digger’s Daughter, A Young Doctor’s Notebook, The Given Day, others. It seems like I’m encountering these works every other day, although maybe it’s just me since the Dennis Lehane book is years old.)

Somewhere in France is definitely a case where the author wrote what she loved, and a good example of how timing played into interest in her book.