Posted by c2london in Inspiration on October 6, 2014 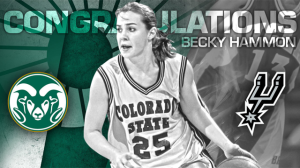 I started attending women’s basketball games at Colorado State University more than two decades ago. Early on in the 95-96 season,  I remember saying, “Where’s that little girl? We need her on the court.” That little girl was 5’6″ Becky Hammon, who was recently named the first full-time female assistant coach for an NBA team.

Today is the first day of the Women’s Fiction Writers Association Women’s Fiction Week 2014 workshop. It features presentations from many  names in women’s fiction. While reading through the introductory messages from other participants, I found myself getting depressed. They were almost all published or had novels circulating with requests to read. While at the opening luncheon for the 2014-15 season of CSU Ram’s basketball yesterday, another fan alerted me to a recent video with Robin Roberts interviewing Becky. It was just what I needed.

Some of her encouraging words: Keep perspective, have an unwavering belief. She mentions figuring out how she can make herself better (workshops/conferences), as well as how can she make those next to her better. (critiquing/writing group)

Advice to young girls: bring passion to everything you do. Have an excitement and enthusiasm to your work and work as hard as you can.

The take away? Becky is on the short side, from South Dakota. She was under recruited to college, which is why Colorado State was able to snag her. She did have a great teammate in Katie Cronin.

Probably both of them helped and encouraged each other to be better. I suspect Katie, along with Becky’s family, was a big supporter of her progress when she–again–wasn’t recruited out of college into the fledgling WNBA.

I was at another pre-season basketball picnic before Becky’s junior year. She was walking around and introducing herself to the fans, saying, “Hi, I’m Becky Hammon.” It was funny because, of course, we all knew who she was. To the list of qualities she listed for young girls to strive for, I would add humility. Also obvious in the video, but not something she mentions directly, is the support and belief from others who are important to you. In this case, her family always showed support. Her parents made the drive from Rapid City to Fort Collins for all her games, and although I’m no longer in touch with either Becky or her family, I’m sure they continue to show her support. Actually, I did talk to another one of her former teammates at that luncheon yesterday and she mentioned that Katie and another teammate where making a video to send to Becky. She also said all the teammates sent words of congratulations and support as well.

Now after watching her inspiring video, I need to tackle that workshop again and look at it as an opportunity to get better so that I, too, can be one of those published writers one day.

Is there a sports figure or someone from another field of endeavor who has words to inspire you?

Have YOU used Learning Opportunities on the Web?

Posted by c2london in Online and multimedia learning, Writing on February 3, 2014

Today I’m embarking on a second Rocky Mountain Fiction Writers’ workshop via yahoogroups, Editing and Revising for Fiction Writers. So far the number of participants seems more manageable than the Heros, Henchman and Sidekick class I took recently. The class length is a bit longer, and there are a few more self-identified mainstream writers. My first problem is to pick a manuscript to work on.  The first assignment, though, is to write for twenty minutes without censoring ourselves, so the necessity of picking a manuscript can be put off a day or two.

Meantime, I’ve been checking out some of the online college courses to see how they compare to The Great Courses. As one of the drawbacks of The Great Courses is the cost, I was trying to find free college courses on the web, mostly because I’d heard talk of such. Here is an overview of what I’ve found so far, although I have not taken any of these courses. I did find a few other sites that wanted all sorts of information before you could view offerings; I did not look into their offerings.

Coursera:   There are plenty of subjects and classes listed. When I put “creative writing” in the search field, the only class that came up was a Writing Like Mozart class that sounded like it was geared to music.

TED: Under the heading of writing, 33 talks came up. From my brief scan it looked like most of those related to writing were of the inspirational sort and on the short side, making them easy to fit in during down times. They included ones like this: J.K. Rowling: the fringe benefits of failure. This youtube video may be the same or slightly different:

edX.org: has free classes and many interesting ones, although when searching the topic of writing, the ones I found were not currently offered. Another interesting looking class was taught in Mandarin.

This website could also be useful when looking for free online classes: MOOCS: Top Ten Sites for Free Education with Elite Universities. When I followed the links, I came up with UCLA. Unfortunately, all the courses I checked on writing had a fee, the lowest of which was $145.

I hope to have some time in the future to check out a few of these offerings and continue my search for information on the web. I would, though, be very interested in hearing what courses you have tried and what luck you’ve had finding inexpensive or free programs.